I already wrote twice about my experience at a recent taping of Jeopardy in July. The three shows I attended aired last week so I am finally at liberty to discuss the details.

Wizard of Vegas forum members are all familiar with moderator BeachBumBabs. She passed the online test (which I failed with flying colors) and a live audition to be invited onto the show. Hers aired on 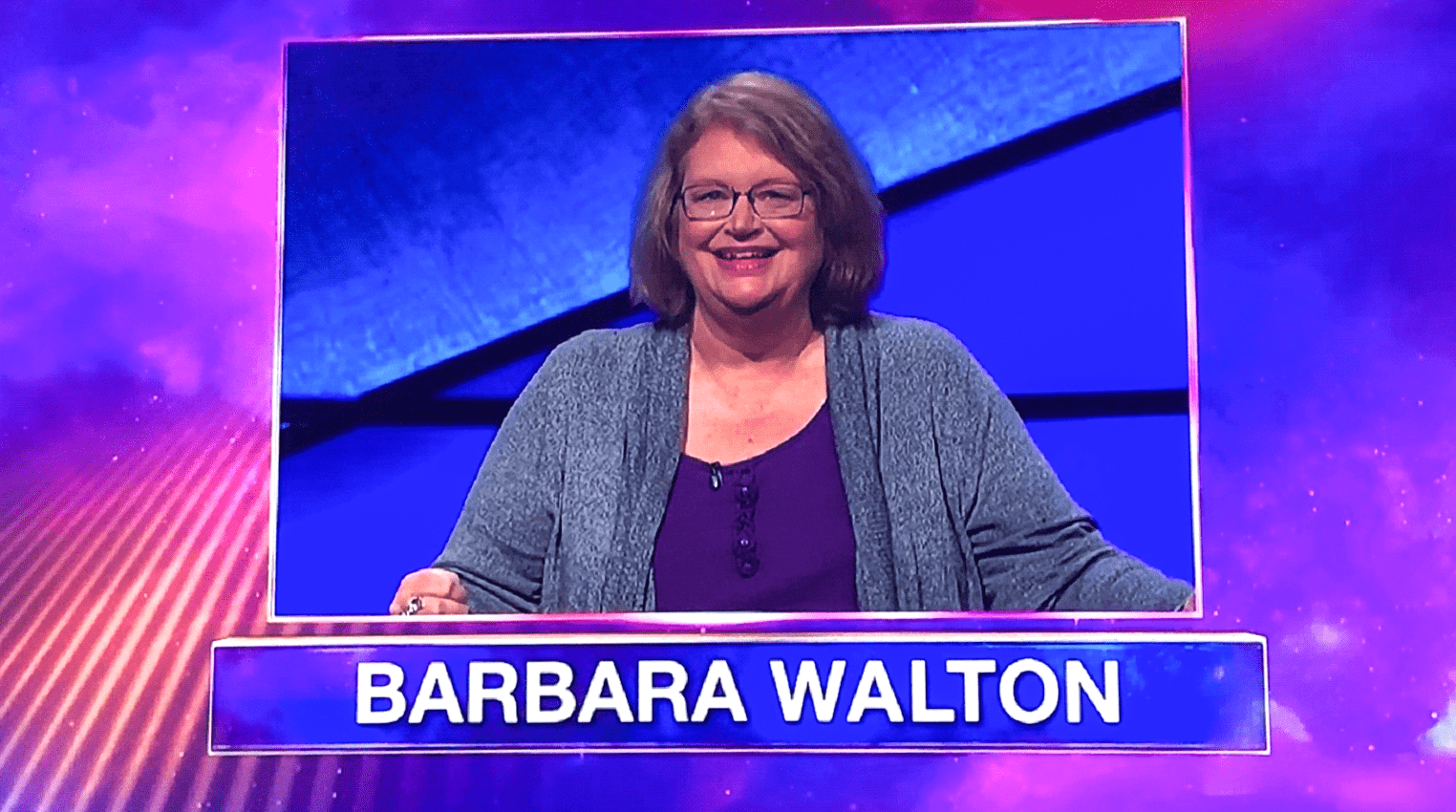 The categories were very appropriate for Wizard of Vegas members. First, a whole category titled "Describing the Casino Game." Here were the Clues:


Next, I have been writing about Burning Man extensively on the forum. What are the odds Alex would ask in the category of Itty Bitty Cities,

"Black Rock City is created & torn town every years as part of this Nevada arts festival." 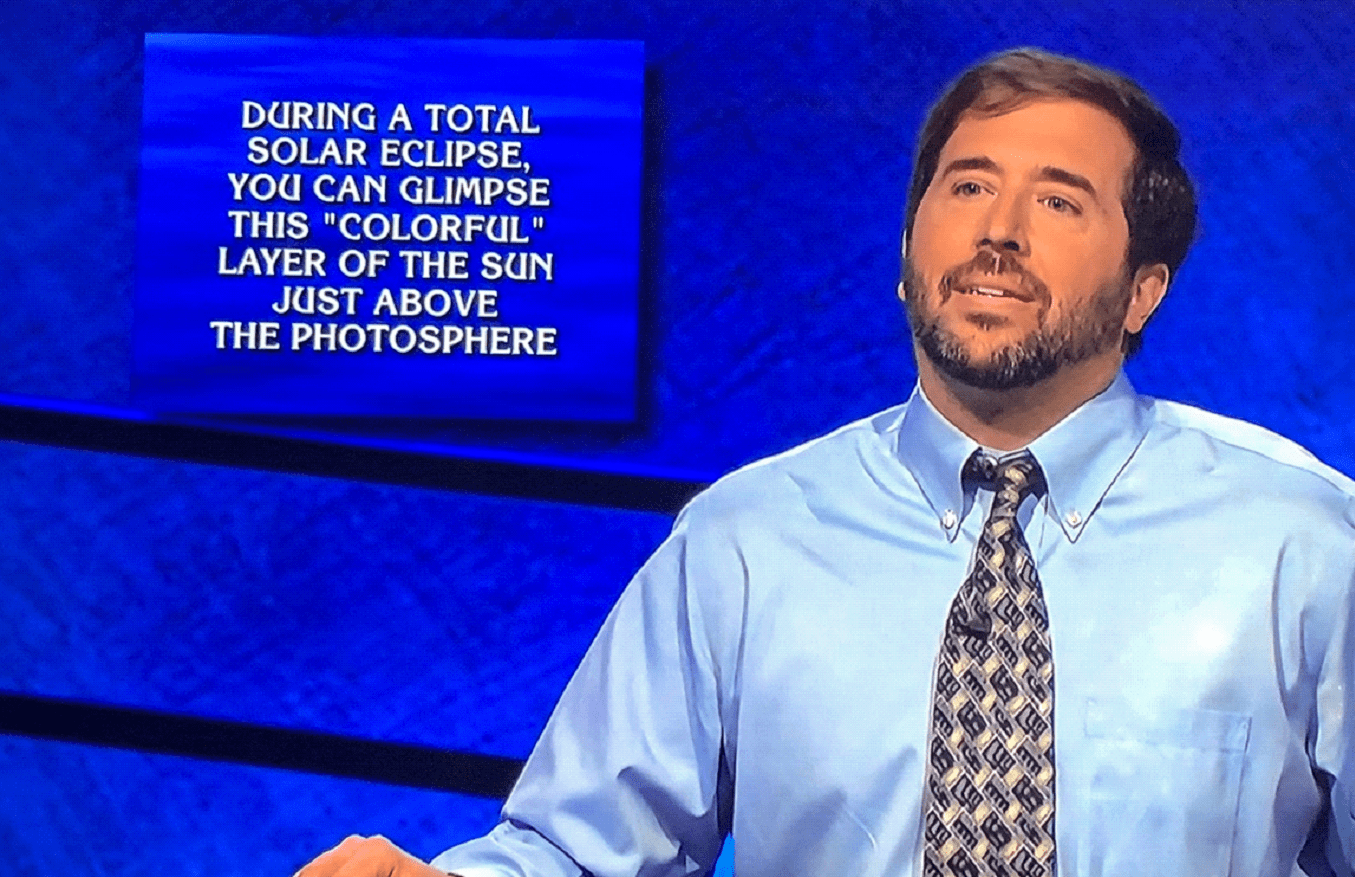 I have also written extensively about the 2014 total eclipse. Many Wizard of Vegas members attended a gathering for it in North Carolina. Despite knowing a thing or two about eclipses and astronomy in general, I must admit I didn't know the answer to this one.

The answer, by the way, is the chromosphere.

For years, the most popular thread on the forum was the Spanish Word of the Day. What are the odds there would be an entire category on things one might say to a spaniel in Spanish.

The Jeopardy round Daily Double was found early by Jason in the Jeopardy Round. Here were the scores at the time:


Jason correctly bet the maximum allowed, $1,000, and got the eclipse question above, which he got wrong.

Jason also found the first Daily Double in Double Jeopardy. Here were the scores at the time:


Jason wisely bet all of it. It was a close game at this point in the middle of the game and Jason needed to build his lead. Given that most players have about an 80% to 90% chance of getting a random question correct, taking an educated risk was definitely called for at this juncture. He got it right.

Unfortunately for Barbara's chances, Jason also found the final Daily Double. Here were the scores at that time:


The optimal wager in this situation could be debated, but I think going low is the right move. As a rule of thumb, late in the game you want to have double the money as the second place player. The thinking should be what is the most I can risk and still be double second place with a margin of safety. He could have wagered $10,000 and been exactly double second place if wrong. However, there was still more game to go and a bad run could risk being overtaken in Final Jeopardy. Jason wagered $3,000. This, I thought, was a little too conservative, but understandable. He got it right to easily lock up the game. 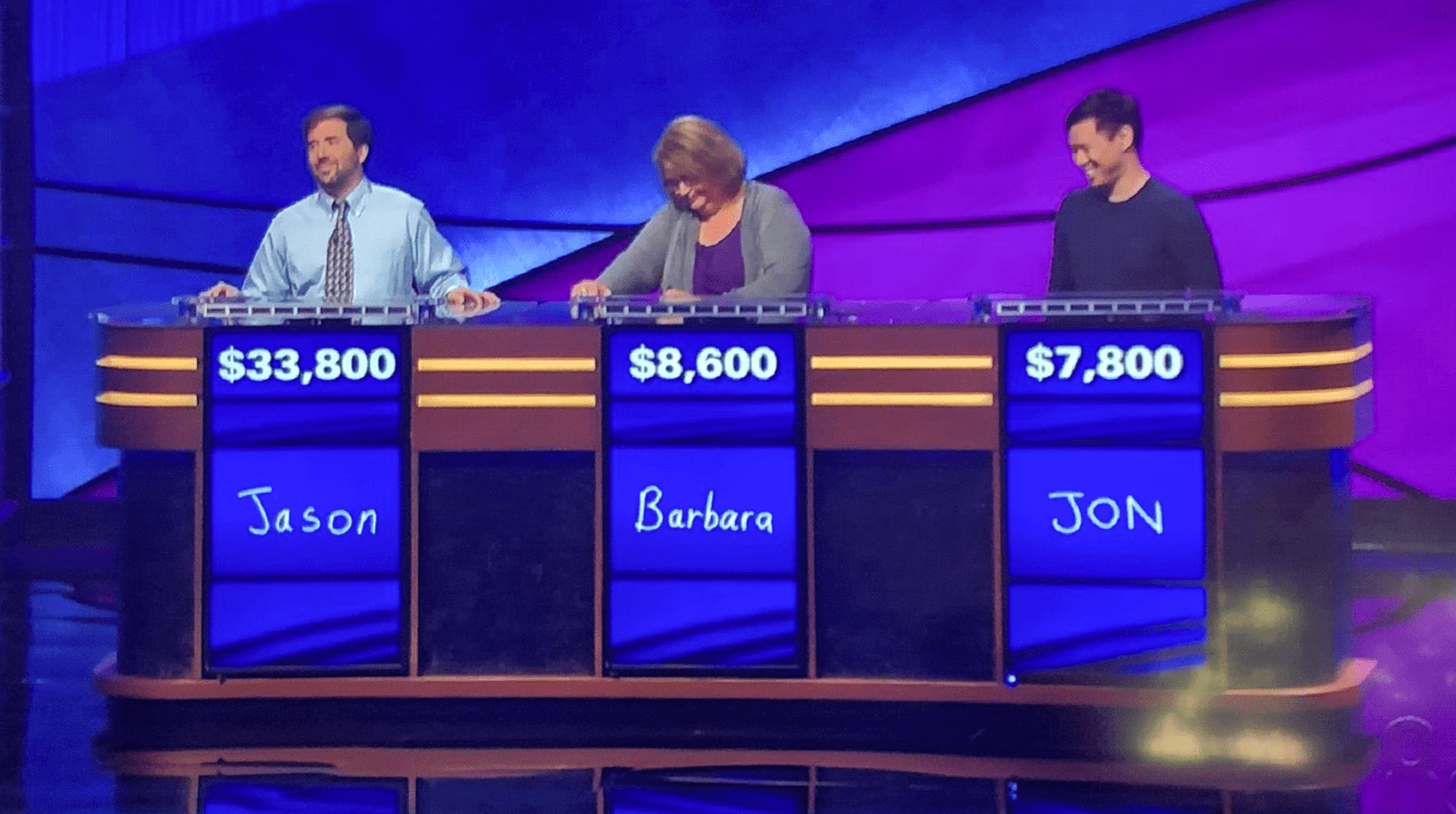 Here were the scores going into Final Jeopardy:


Jason couldn't be caught, unless he made a huge mathematical blunder by betting over $16,600, being wrong, and then being caught by another player. Of course, he didn't do that and played it safe with a small wager of $3,800. Personally, I'd have wagered just under $16,600, because I figure my chances of being correct are well over 50%. It's a good bet and still locks in first place.

Barbara's thinking at the time should have been the classic "high or low" dilemma to win second place, which pays $2,000, as compared to $1,000 for third. Historically speaking, the last place player usually bets it all or almost all of it. Assuming Jon did that, Barbara should have wagered

The Final Jeopardy category was the 1940s. The Clue was, "This nickname for a history-changing weapon of 1945 came from a character in "The Maltese Falcon."

It should obvious they are referring to the dual atomic bombs dropped on Japan to end World War II. I also knew both names, Fat Man and Little Boy. However, I saw the Maltese Falcon decades ago and don't recall any names from the movie. Fat Man gets all the fame and glory. Expecting someone to know Little Boy seems too obscure for Jeopardy, so went with Fat Man mentally as I watched the taping.

In conclusion, it's also worth noting that James successfully clicked in on more than the sum of the total of Barbara and Jon. It was clear from watching the show that Barbara clicked on almost every Clue, but Jason's timing was simply better. Every losing Jeopardy player seems to complain that the clicker strongly favors the experienced champion. In comments after the game, Barbara complained that she never got the rhythm of the clicker.

For lots of discussion about the game, please visit the thread Jeopardy Online Test. The link will take you to the first post made once the game aired on the east coast.