Last week I crossed off something from my bucket list, a four-day visit to Lake Powell.

Let me start with the basics. Lake Powell is American's second largest artificial lake, or reservoir, behind Lake Mead. At times, it beats Lake Mead, depending on the water level ofboth. It was created after the completion of the Glen Canyon dam in Arizona in 1963. Afterward, Colorado River water backed up, creating the reservoir, over many years.

Geographically, Lake Powell straddles Arizona and Utah, the majority in Utah. From a map, the lake looks more like a river with scattered wide open spots. The surface area is about 250 square miles, which is about 25% that of Rhode Island. However, the shore length is 1,900 miles. Most of it fills a canyon that resembles a small Grand Canyon. It is much more attractive than Lake Mead, which mostly sits in a boring esert.

More people would probably visit Lake Powell if were more accessible. It is located in a remote part of Arizona and Utah that is hours away from the closest major cities like Las Vegas, Salt Lake, and Phoenix. Most people enjoy it by boat but some hike in. There are also three marinas one can drive to.

Last Monday, Mrs. Wizard, two friends, and I boarded a rental houseboat in Bullfrog Utah to start our four-day adventure. None of us had been to the lake before nor had much boating experience. However, I had just driven an RV from Las Vegas to Reno, which gave me confidence to operate the houseboat, which I did most of the time.

On our first day we headed off about 1:00 PM and headed south. We were told we had enough fuel to boat about six hours a day maximum. The boating was easy at first in the wide open part of the Lake. We had long discussions about where to go and where to camp. In the end we decided to find any side canyon and look for a beach to anchor.

By 5:00 we were looking through a side canyon called Slick Rock for a camping spot but what few nice beaches we found were all taken. Even lousy rocky spots were taken too. The sun was sinking and panic was starting to set in. Other rocky spots started be identified as "emergency options." After exploring every nook and cranny (Thomas English muffin anyone?), we went onto Iceberg Canyon a little further south.

As we slowly explored every side canyon of this side canyon we continued to find every beach occupied and many other house boats parked against piles of large rocks and boulders. The skies continued to get darker. The level of panic ranged in the group increased by the minute. I'd like to think I was the most calm. Some wanted to turn around and grab whatever "emergency spot" we could find. However, I was determined to reach the end of Iceberg Canyon before giving up.

At the end of a winding prong of the fork of canyons at the end of Iceberg we found a perfect spot. Very quiet, isolated, with a large soft beach. If I were a religious person, I would have said it was a gift from the Man in the Sky. 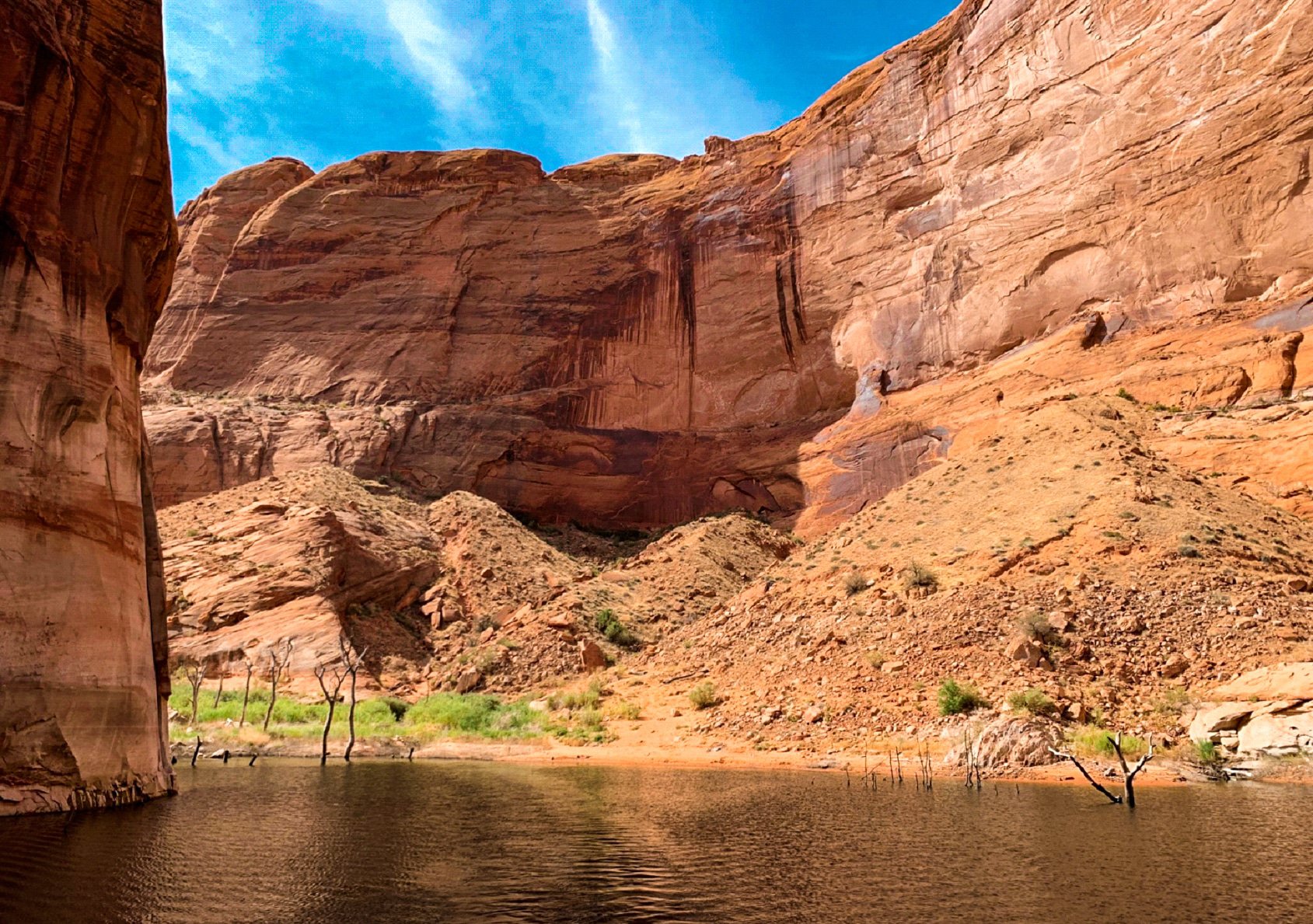 As the picture above shows, taken upon leaving, there was a nice level beach at the end of the inlet.

The spot was so nice and we arrived so late that we decided to stay there two nights. The next day was full of activity. We fished, kayaked, stand up paddleboarded, hiked, and swam. I hadn't fished in 30 years and didn't really know what to do. Despite my inexperience and that of the rest of the group, we caught fish right and left. It took only seconds for fish to gather once bait was cast into the water. Many fish escaped, some were released for being too small, but after an hour it got later in the morning and the fish seemed to have gone to sleep.

Later in the day a Burmese couple came along in a smaller boat and parked nearby by. They and their dog jumped out with fishing polls in hand and headed up the rocks behind our beach. I asked where they were going and they said there was a lake just over the ridge. A little small talk ensued and off they climbed. While I was napping they returned and gave us five fish as a gift, saying they already had plenty. Combined with the fish we already caught, I was feeling like the Jesus' apostles must have felt in the story of the miraculous catch of fish (trivia -- How many fish did the apostles catch?). Later that afternoon most of us hiked to the hidden lake ourselves. 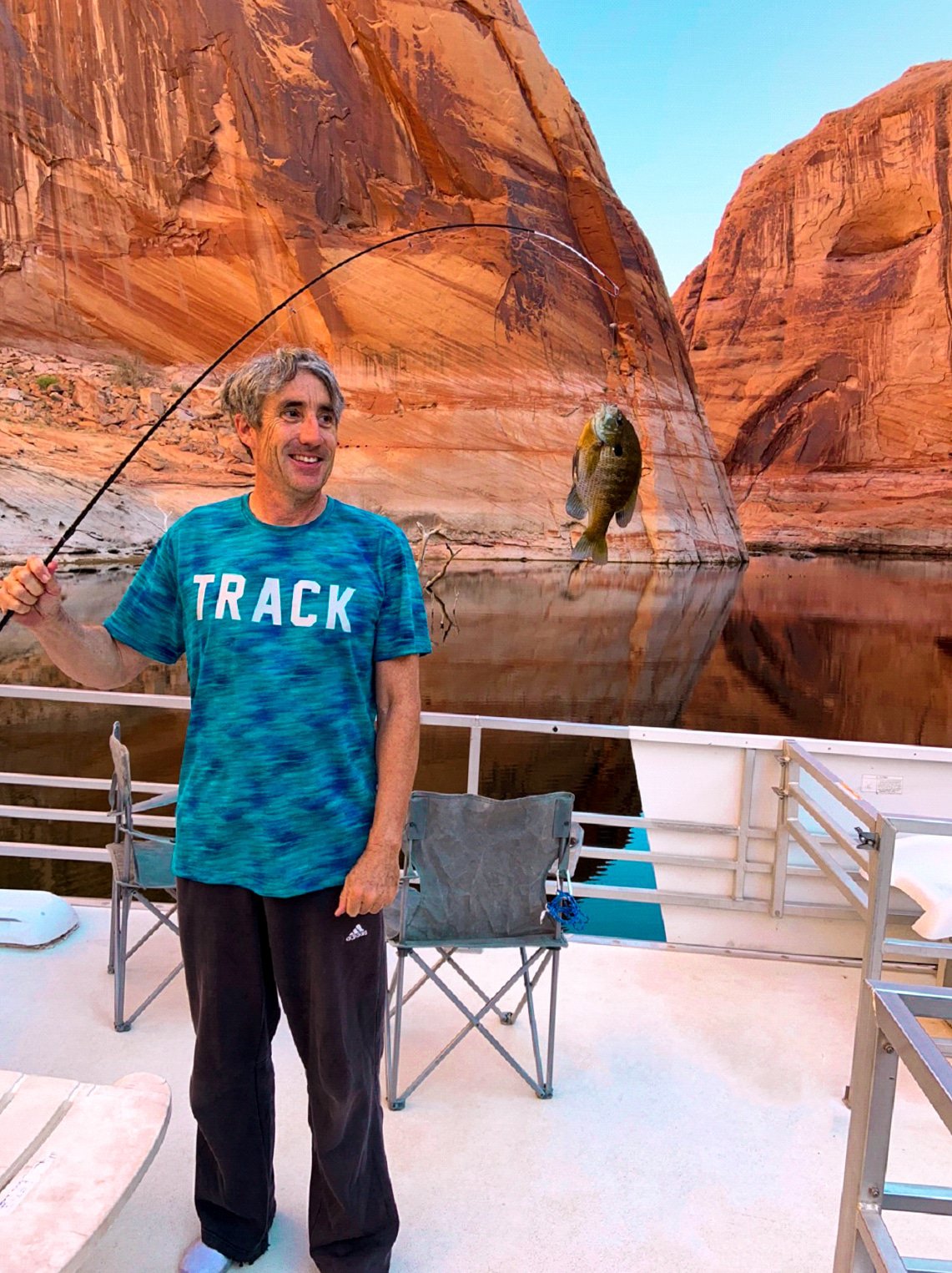 Here I am with my first fish caught since the 1990's. I'm still not sure what kind of fish it is.

As we entered our third day the group was divided whether to stay at our perfect Iceberg Canyon spot or explore more. I voted to explore. The rest of the group was rather passive, so my vote was pretty much the only one, so we bid farewell to Iceberg Canyon and headed further south, to Escalante Canyon.

Just getting there was an adventure. First we got lost, shortly after I passed the steering wheel to another member of the group, and we somehow ended up back at the entrance to Iceberg Canyon. Then, after getting us past the point where we got lost, I passed the wheel to another member of the group in an easy wide-open part of the main section of Lake Powell.

After all that drama I grabbed a can of beer and went to the top deck to relax by myself. It was wonderful, just me, a beer, and a 360-degree view of the canyon. In the middle of a state of blissful relaxation I saw the boat was headed straight for some rocks barely peaking out of the water. I think being on the top of the boat helped me to see them better than the rest of the group below. We were about 30 seconds away from smashing right into them. Reminiscent of the iceberg sighting scene from Titanic, I raced down the stairs, fumbled with the sliding back door, and screamed "rocks straight ahead!!!" to everyone down below. The driver still didn't see them, but another member of the group did, and screamed "slow down and turn right!!!" Fortunately, she did, not knowing why, and we escaped disaster by a matter of several feet. This probably explains why they don't recommend boating at night.

That was the most dramatic event of the trip and a good note to stop on. I'll continue with my Lake Powell adventure next week. 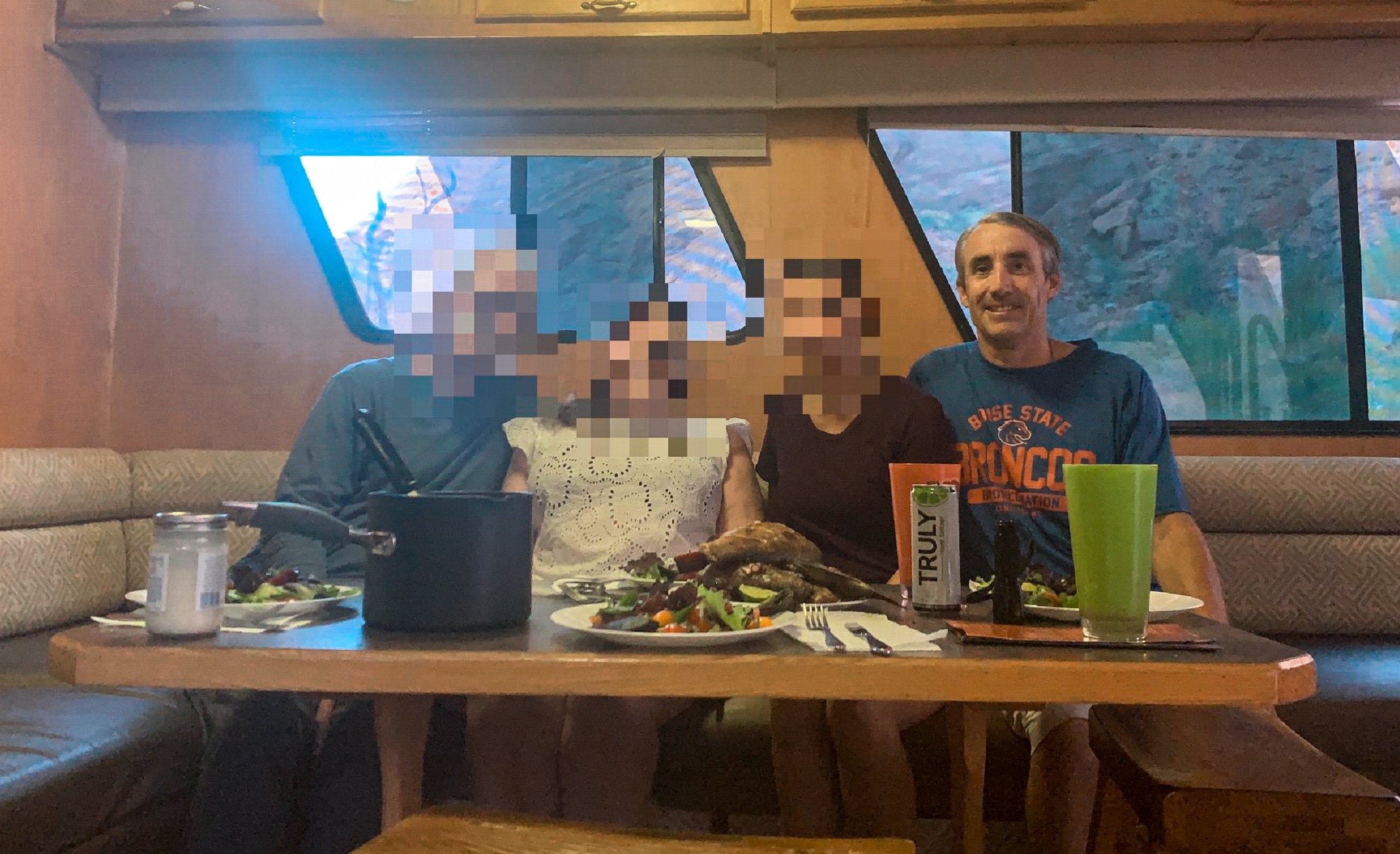 Enjoying a delicious dinner of fresh fish on our first full day.